Daily admission is $25, and kids 12 and under are free. Parking is free and camping is free, too, with a multi-day ticket. Gates open daily at 7 am. 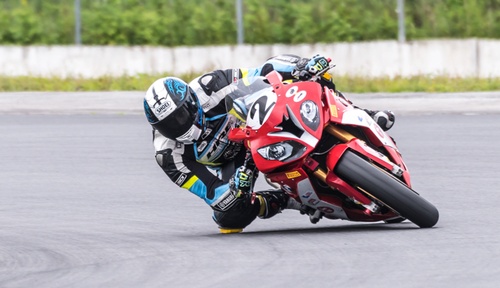 Just two weeks after 11,000-horsepower dragsters put on an amazing show at Brainerd International Raceway, the track will be alive again this weekend with thunderous drag racers and high-flying Superbikes during the 31st Annual GSTA Muscle Car Shootout.

An action-packed weekend awaits fans, as BIR ushers out summer with one of its most popular events of the season, featuring the finale of the Muscle Car Series on the drag strip, thrilling Superbike racing on the road course, a classic car show and live music by Junk FM.

The competition on the drag strip is expected to be intense this weekend with the last leg of the three-race Muscle Car Series determining season champs in 13 different classes. They’ll be leaving everything on the blacktop as they slug it out one last time this season.

The seven Heads-Up classes will attract the most attention because the rules are simple: both cars leave at the same time, and the one that reaches the finish line first wins. The Outlaw Pro Mod class, with the fastest cars, features cars that are flirting with 5-second times and well over 200 mph. Defending champ Rick Schmidt cracked the 5-second mark during last year’s Shootout and did it again two weeks ago during the Lucas Oil NHRA Nationals. He’s comfortably sitting in first place in the points standings, having won the first two series races.

Todd Mueller and Paul Gibbs are one and two, respectively, at the top of the standings in the second-fastest class, Outlaw, but defending champion Bubba Romanyshyn may play the role of spoiler. He missed the first race but won the second race and easily has the fastest car in the field.

In King Street, Dave Feders, Dick Fulton and Mike Sterling are gunning for top honors, as they sit atop the standings in that order, but it’s anyone’s game, even though Feders won the first two races and is looking to sweep.
All 400+ cars that are expected this weekend are “door slammers” (no dragsters), and most are show quality. So, if you’re a fan of vintage muscle cars, BIR is the place for you this weekend.

On the 2.5-mile Competition Road Course, the Central Roadracing Association brings its insane brand of Superbike racing to the 13-turn track for three days of thrilling racing during its Double Sprints weekend. It’s the fourth of five weekends of racing for the CRA at BIR, and this year’s competition has been fierce.